Blake Byrne received a Bachelor of Arts degree from Duke University in 1957 and an MBA from Columbia University in 1961. He spent 35 years in television broadcasting beginning at CBS in New York, with interim stops along the way at Chris Craft Broadcasting in Portland, Oregon; Outlet Broadcasting in Providence, Rhode Island; LIN Broadcasting in Ft. Worth-Dallas and New York; and Disney in Los Angeles, before becoming Co-Founder and President of Argyle Television in Los Angeles and San Antonio, Texas.  Presently he is Chairman of the Byrne Acquisition Group (his son John Byrne’s company) with television stations in Madison, Wisconsin and Hilton Head, South Carolina, and radio stations in Myrtle Beach and Clemson Grove, SC. 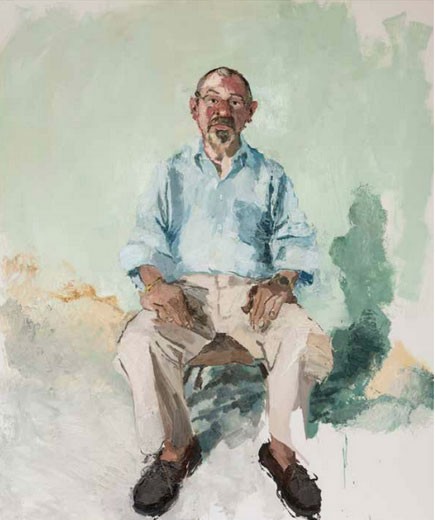 Art was always a passion for Blake but he began collecting in earnest in 1988 when his focus shifted to cutting-edge contemporary art.  He was living in New York and met Jack Tilton, his long-time mentor and friend, while visiting his gallery.  When he asked Tilton how one starts to learn about art and collecting, Jack advised him to attend Art Basel in Basel, Switzerland where galleries from all over the world converge.  He suggested that Blake spend several days touring the fair, looking at the art and finding artists he liked in order to start developing his own taste.  Blake went to Basel that summer with a budget and came away with his first purchases which included works by Marlene Dumas, Juan Muñoz, Cristina Iglesias, Richard Tuttle, Mario Merz and Martin Disler

From there, he has built a collection that is both expansive and focused, maintaining strong commitments to certain artists including Dumas, Martin Kippenberger, Rita McBride, Jim Shaw, Iva Gueorguieva, Richard Hawkins, Thierry DeCordier, Paul P, Dirk Bell, Juan Muñoz, Richard Tuttle and Thomas Scheibitz.  He continues to acquire works by emerging artists.  His primary residence is Los Angeles but he lived in Paris part-time for 20 years, so the collection reflects a broad awareness and perspective.

Blake Byrne’s passion for art is paralleled by his passion for philanthropy.  In 1997, he founded The Skylark Foundation, a philanthropic family foundation that is committed to encouraging innovation, striving for social justice and supporting diversity.  He has been a trustee of the Museum of Contemporary Art, Los Angeles (MOCA) since 1999 and in 2011 was made a lifetime trustee.

His involvement with his alma mater, Duke University includes serving as Co-Chair of Development for The Nasher Museum from 2002-2005, which helped raise the funds to build the museum.  He has served as Chairman of the Board of Advisors from 2005 to 2014.

In celebration of his 70th birthday in 2005, Blake Byrne made a gift of 123 works of art to the Museum of Contemporary Art, Los Angeles—the largest private donation in the history of the museum.  The event was celebrated by an exhibition and documented by a catalogue.

In 2007, on the occasion of his 50th reunion and in honor of Raymond D. Nasher, he made a promised gift of art to The Nasher Museum.  In 2017, it was converted into a full gift and consists of 38 pieces comprised of 284 individual works of art.  He has also made gifts to the Centre Pompidou, Paris as well as the Ft. Worth Art Museum.

Since the mid 1990’s and for 20 years, Blake Byrne lived in Paris for several months out of each year.  His involvement with the French community included his participation as the first American on the selection committees for the Duchamp and Guerlain prizes.  In 2012 he was honored with a Chevalier de l’Ordre des Arts et des Lettres, an honor given to those who have made a significant contribution to the arts, literature, or the propagation of these fields in France.  In 2015, Blake Byrne received the Distinguished Alumni Award at Duke University, an honor reserved for just 33 alumni to date.